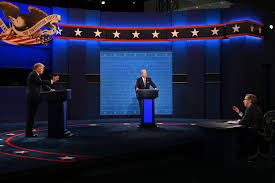 The first presidential debate was held on Sept. 29.

The first Presidential Debate of 2020 elaborated on our candidates solutions to today’s most pressing issues and presented voters with their strengths and weaknesses of leading our country. Donald Trump, America’s current president, and Joe Biden, our former vice  president, debated with moderator Chris Wallace on Sept. 29.

Fueled by an intense election, this debate was filled with interruptions, insults, and distractions. Both Trump and Biden agreed on two-minute answers for each question and were allowed responses. Although interruption was constant, coherent replies are duly noted to the pros and cons of each candidates potential.

The knowledge of the upcoming pandemic COVID-19 was known by officials in January. President Trump’s action toward the protection of the American people has been constantly questioned. Wallace asked, “Why should Americans trust you more on dealing with the Coronavirus pandemic?” to both Trump, Republican, and Biden, Democrat.

“In the notion of the vaccine I don’t trust him at all nor do you [viewers] what we trust is the scientists,” Biden said.

First to answer the question, Biden described the stats of coronavirus’ death toll and how Trump handled the situation poorly. While the question isn’t directly answered, the Democratic candidate suggested he would do better and would have listened to scientific suggestions for safety.

“[Referencing others comments] President Trump did a phenomenal job… you could never have done the job we did [to Biden],” said Trump.

Similar to his opponent, Trump diffused the question and didn’t directly answer the inquiry.

Another critical issue that had gained more attention this year is racial injustice and discrimination. Triggered by the tragic death of George Floyd in May, there have been countless protests and riots marching for racial equality and the end of systematic racism. Wallace asked: “Is the justice system fair to African Americans?”

“We have to have a system where people are held accountable, by the way violence in response is never appropriate,” said Biden.

Biden spoke on the outcome of Breonna Taylers case making it known that he believes it was unjust. He stated what he would do to fix the situation and finished within the allotted time.

Trump was asked a different question along the lines of systematic racism. It must be stated that in September, Trump banned racial sensitivity training to federal contractors, claiming it was against American patriotism on social media. He was asked, “Why did you direct the federal government to end racial sensitivity training and do you believe there is systematic racism?”

“I ended it because it was racist… they were teaching people to hate our country,” said Trump.

Our next president will determine further action on climate change. Wallace asked, “What do you believe about the science of climate change and how will you address it?”

“People are actually very happy with what’s going on because our businesses are doing well. As far as the fires are concerned, you need forest management… [asked if human pollution causes global warming] to an extent yes,” Trump said.

It is stated multiple times in Trump’s response that forest fires can be prevented through management and cleaning of leaves and dead trees. Trump did say that humans’ carbon footprint and pollution contributes to global warming, but he ultimately believes our environment now has the lowest amount of carbon pollution.

“We’re going to move to renewable energy… not costing people jobs but creating millions of good paying jobs… by having a new info structure that is green,” Biden said.

Biden assured the voters of his plan to create more jobs in an environmentally friendly way through what he calls ‘The Biden Plan.’

To many, the debate was messy and the candidates spent most of the time bickering and insulting each other.