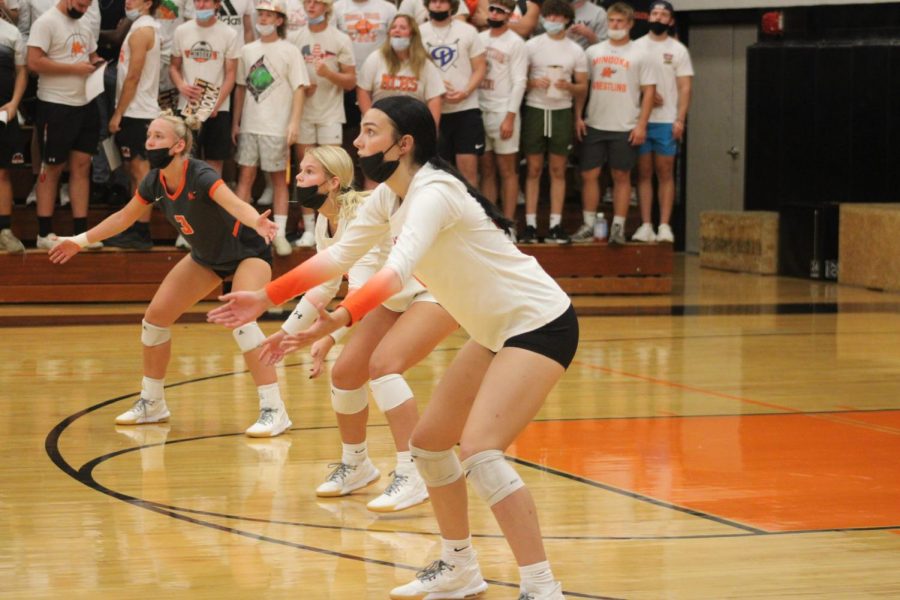 Senior Emma Harper prepares on defense for Minooka at a home game against Yorkville on Sept. 16.

Minooka had an off night on the volleyball  court against a strong Lockport team.  The varsity girls team suffered a tough loss to the Porters 2-0 on Sept. 20 at home.

The Indians had a hard time putting the ball away. The offense was led by senior Emma Harper who had 6 kills in the game.

“Our offense was way off, and we lacked putting the ball away,” head coach Carrie Prosek said. “When offense fails it is hard to catch up.”

However, with the offense out of sync, the defense was able to give the Indians some hope throughout the night.

“We played as a team and we caught up in both games but it wasn’t enough to finish the game,” Harper said.

The Indians were within 4 points of Lockport when senior Brooke Fuhr had a big time block to create some energy for the Indians, and the score was 20-17. The Indians ended up losing the first set 25-19.

The second set was much like the first set, Lockport grabbed an early lead and the Indians were working from behind in the set once again.

Baranksi had 8 digs and 2 kills.

“We had a hard time siding out against Lockport, and we let them get on a couple of long runs, this hurt our confidence affecting every other aspect of the game,” Baranski said.

The Indians had some hope in the second set when Baranksi scored on a big block to make it 11-8.

However, after this block the second set started to fall out of reach for the Indians. Minooka attempted to climb their way back in the second set but ended up losing 25-14.